With dramatic, otherworldly landscapes, epic natural wonders, and a rich cultural history, a romantic getaway in Iceland will spark the wanderlust within. Adventure lovers from around the world flock to this tiny north Atlantic island nation to marvel at intense natural landforms and picture-perfect scenery. Hike to volcanoes and waterfalls that take your breath away, soak your muscles in warm geothermal lagoons, and drift to sleep under the vibrant Aurora Borealis as it lights up the night sky. A honeymoon in Iceland will be a romantic getaway like no other.
Begin in Reykjavik, the country’s capital and cultural heart. One of the cleanest and greenest cities in the world, it’s home to a thriving community of imaginative writers, poets, and musicians. Sample the local melodic offerings with a live show downtown, and stick around to enjoy Reykjavik’s famous weekend nightlife. The next day, head to the National Museum of Iceland and trace the country’s history all the way from its Viking origins to the modern day. Then have a chat with the locals in one of the city’s geothermal pools, a beloved Icelandic pastime.

Once you’ve gotten a taste of the capital city, say goodbye to civilization and set out to explore the wilderness. The best way to see Iceland’s countryside is on wheels, driving to tucked away corners of pristine natural beauty untouched by the presence of towns and cities. If you’re short on time, set your focus on the Golden Circle, a 190-mile tourist route near Reykjavik that can be seen in just one day. You’ll witness some of the most impressive sights Iceland has to offer: the stunning Gullfoss, considered Iceland’s most beautiful waterfall; Thingvellir National Park, where Earth’s tectonic plates are ripping apart; and the powerful Strokker geyser, which shoots water up to 100 feet in the air every few minutes.

If you have at least a week, the best way to experience Iceland’s mystical landscapes is on a countrywide journey along the Ring Road. Plan to spend at least seven days traversing this 800-mile route that encircles the nation; you won’t encounter much traffic, but photo stops and sightseeing excursions will be plentiful. On the Ring Road, you’ll uncover the wonders of the Golden Circle and so much more: the arctic foxes and mythical folklore of the Westfjords, the midnight sun in the north, the rugged black sand of the east coast, and all the spectacular fjords, volcanoes, glaciers, geysers, waterfalls, and rainbows in between.

Whichever way you choose, a venture into the Icelandic wilderness will be a sight to behold. Its ethereal landscapes are the stuff of fairytales; it’s no wonder the country has inspired so many generations of poets and storytellers. Begin your own beautiful story together amidst the vivid dreamscape of Iceland.

Get directions on Google Maps

More articles, insight and planning tips for honeymoons in Iceland. 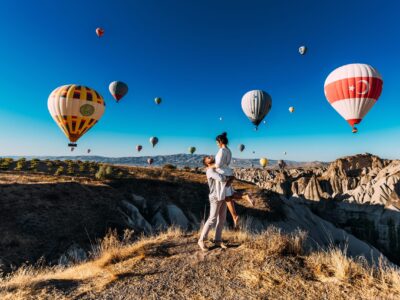 The process of declaring one’s devotion and commitment to one another through marriage is one of life’s greatest adventures. After…