Photo by Denny Ryanto on Unsplash

The magical land of China is a place where old meets new. Ancient walls, temples and fotresses coexist alongside cosmopolitan cities and absolutely breathtaking scenery. The diverse geography includes everything from enormous mountains and rolling hills to beautiful rivers and fertile valleys. The beauty of the land makes for a romantic getaway to a true exotic paradise.

One of the best ways to honeymoon in China is with a reputable tour operator like Ritz Tours, who offers China tour packages that are perfect for romance. They’ll take care of all the planning and details so you can have the perfect stress-free honeymoon you’ve been dreaming of. Once you’re here, you won’t want to miss these top ten must-see honeymoon destinations in China!

Located in the enchanting Old City of Shanghai, the 400-year old Yu Garden rests just outside the legendary City of God Temple. The incredible scenery is a wonder to behold with its pavillions, beautiful rock formations, Chinese-style bridges, goldfish ponds and an 11-foot boulder of porous jade rock.

It’s the perfect place to hold hands and explore. You’ll feel like you’re walking through a land of fantasy, but the beauty of Yu Garden is a China honeymoon reality for any couple lucky enough to find themselves there.

The most complete city wall that has survived in China and one of the largest ancient military defensive systems in the world, the Ancient City Wall in Xi’an is an incredible sight and a glimpse into an ancient world. Even better, its in an area with beautiful surroundings and great couples’ activities like cycling and fun-filled cultural festivals. The South Gate, known as Yongning Gate, is the most time-honored and magnificent among all the city gates in China. Hold hands and get ready for an adventure to China’s “other great wall”!

The Bund is a famous waterfront area regarded as the symbol of Shanghai for hundreds of years. Picture-perfect for romance, couples will delight in the west side of the Bund where 26 beautiful buildings await. These structures display a unique range of architectural styles including Gothic, Baroque, Romanesque, Classicism and the Renaissance. For your honeymoon in China, the beauty of the Bund is a sight you simply must experience.

With over 1,700 retail vendors and a wide selection of counterfeit designer brand apparel, the market sells both fashion apparels & accessories and traditional Chinese handicrafts, antiques, calligraphy and carpets.

A former imperial palace and now a park, the Summer Palace is now a UNESCO World Heritage Site. The palace was declared as a masterpiece of Chinese landscape garden design, with a breathtaking natural landscape of hills and open water combined with artificial features such as pavilions, halls, palaces, temples and bridges. If you and your other half are looking for a honeymoon destination with gorgeous sights, look no further than Beijing’s Summer Palace.

A UNESCO World Heritage Site, the Temple of Heaven was once visited by the Emperors of the Ming and Qing dynasties for annual ceremonies of prayer to Heaven for good harvest. Just like your sweetheart is your little piece of heaven on earth, this beautiful complex contains several features built to symbolize the connection between both.

It was claimed by UNESCO that this place is a masterpiece of architecture and landscape design which illustrates a cosmogony of enormous importance for the evolution of one of the world’s great civilizations. 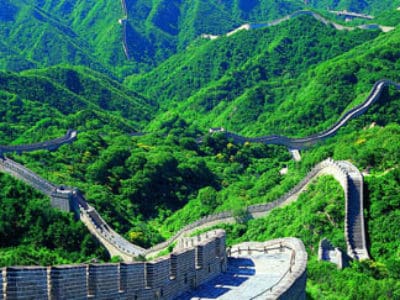 4. The Great Wall of China – Beijing

One of the Seven Wonders of the Ancient World, the wall was built along an east-to-west line across the historical northern borders of China in part to protect the Chinese Empire against foreign invasions. Take your sweetheart’s hand and explore China’s most famous historic relic – truly a honeymoon sight to behold!

3. The Museum of Terracotta Warriors and Horses – Xi’an

Only uncovered in the mid-1970s and made a UNESCO World Cultural Heritage Site in 1987, this is a site where buried terracotta scultpures were discovered depicting the armies of Qin Shi Huang, the first Emperor of China. For couples with even the slightest interest in China’s rich culture and history, Museum of Terracotta Warriors is an absolute must-see on your honeymoon!

The romantic Li River area, with all its incredible natural beauty, is considered a pearl of China’s thriving tourist industry. The geography is mixed, featuring strangely shaped hills covered in verdant vegetation ranging from bamboos to conifers together with crystal clear waters and wonderful caves. Cruise along the river and discover limestone cliffs dotted with mysterious hanging coffins and the Elephant Trunk Hill, a natural stone archway over the water providing incredible views of Guilin.

The longest river in Asia and third longest in the world, the Yangtze River is a natural wonderland perfect for a romantic getaway. Escape to the beauty of a snaking waterway linking cities from Sichuan to Shanghai, and learn about the river’s historic importance as a water source, a trade and transport highway, an irrigation system, a geographic border and a strategic route in war.

A romantic China honeymoon cruise along the Yangtze gives couples the opportunity to experience awe-inspiring excursions to places like the ancient “Ghost City” of Fengdu, an enchanting region of steep cliffs known as The Three Gorges, the mountain region of Wushan and the world heritage site of Huangshan, where the scenery has inspired generations of traditional Chinese painters.

For the perfect honeymoon, choose a reputable tour operator to plan and arrange your trip.  The folks at RITZ TOURS, a company with over 32 years of tour operating experience, are experts in hand-crafting itineraries to exceed every customers’ satisfaction.

Most recent articles, insight and planning tips for honeymoons:

Enhance Your Jamaican Honeymoon With an Extraordinary Experience at Miilé Spa

JAMAICA: A Paradise for Bachelorette and Bachelor Parties

Jamaica – The Island Paradise for Anniversaries and Vow Renewals